Why Can't You Tell The People? 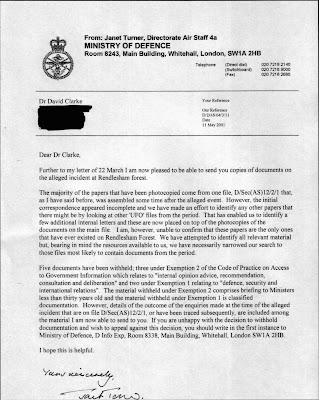 The famous file on the Rendlesham Forest incident has been re-released to the public today as part of the fourth tranche of MoD UFO papers opened by The National Archives.

A historical note (DEFE 24/1948 p4) explains how it emerged into the public domain as one of the first UFO files released under Britain's open government initiative.

Back in February 2001 it was my application using the 'Code of Practice' - a precursor to the UK's Freedom of Information Act (FOIA) - that first persuaded the MoD, after years of stonewalling, to release the 190-page case file.

Even then, after months of negotiating, the MoD continued to with-hold five documents for spurious reasons and in September that year, after I appealed to the Parliamentary Ombudsman, 2 more were released.

UFOlogist Eric Morris, who died last year, continued to fight for the release of the remaining 3 documents, which included a background briefing and correspondence from former MoD official Ralph Noyes. These were finally released on appeal in November 2002.

During August 2001 I passed a copy of the Rendlesham file to Richard Norton-Taylor, defence correspondent for The Guardian, who was the first to break the story.

At the same time, scans of the most important papers were uploaded onto flyingsaucery.com, a website I set up with Andy Roberts earlier that year (these can still be seen on the UK-UFO website, run by Joe McGonagle).

But in September 2001 the UK UFO Magazine (now defunct) published an article by Georgina Bruni, 'The Rendlesham Files', that was billed as a "World Exclusive". This claimed that a different sequence of events had actually led to the release of the file.

In her article Bruni maintained the breakthrough had actually come about as a direct result of pressure on the MoD from Lord Hill-Norton, who had tabled a number of Parliamentary questions about UFOs in the House of Lords during 2001.

She claimed the Rendlesham file was first sent to Lord Hill-Norton by Baroness Symons, Minister of State for Defence Procurement, in May 2001 and added: "After a written request to the MoD I received my own copies of the file nine days later."

Although I was not mentioned in the article, and there was no reference to the Guardian, the implication seemed to be that I was simply jumping on the bandwagon and trying to take credit for something I had no real involvement in.

How ironic then, as a result of our Freedom of Information Act, I can now prove this version is completely untrue.

As the cover note attached to the file released today confirms, the documents were - as I already knew - first released to me under the cover of a MoD letter from UFO desk officer Janet Turner, dated 11 May 2001 (see the copy of the actual letter which I have uploaded to this blog). This release came after seven months of negotiations with the 'UFO desk.'

Before the FOIA arrived it was difficult to obtain precise details of what actually went on behind the scenes and at the time I did not dispute Bruni's claims. But in 2005 I asked Janet Turner’s successor as MoD UFO desk officer, Linda Unwin, if she could check the accuracy of the claims about Lord Hill-Norton's alleged role in the release of the file.

Unwin later confirmed in writing that Hill-Norton actually "played no role" in the release and, added: "You were the first person to request a copy of the Rendlesham file and this is what led to the release of the file."

She added that, in fact, Lord Hill-Norton was unaware the papers had been released until Turner suggested that MoD should now send them to the noble Lord because of his long-standing interest in the Rendlesham incident.

This decision is documented in an internal MoD minute dated 17 May 2001 - again obtained using the FOIA - where Turner writes to the Parliamentary Enquiry branch:

"The papers we hold on this incident have recently been released to a member of the public [David Clarke] who requested them under the Code of Practice on Access to Government Information. Although Lord Hill-Norton has not actually asked to see these documents, as they are in the public domain, it may now be appropriate to make them available to him."

A second copy of the file was subsequently sent to Hill-Norton by Baroness Symons on 16 May. Eight days later Hill-Norton, clearly surprised to suddenly receive the file which he had not asked for, wrote back to say: “I fear that my poor sight will not let me read the papers you sent me, but I shall pass them to a thoroughly reliable UFO researcher.”

The identity of the "thoroughly reliable UFO researcher" remains a mystery. But Linda Unwin later confirmed that when "other members of the public" learned the papers had been released - seemingly after a two month delay - MoD began to receive further requests for copies.

By then, of course, someone else (me) had done all the hard work for them.

Further MoD correspondence on the Rendlesham papers from 2001, released to Andy Roberts under the FOIA, include a copy of a fax sent by Georgina Bruni from a London address to the MoD on 9 July 2001. This was clearly around the time at which she first learned the Rendlesham papers had been released, two months after the date given in UK UFO Magazine. Her fax requested a copy of the file and added:

“I understand that Baroness Symons recently sent copies of this material to Lord Hill-Norton, and that the MoD has also released it to a member of the public”.

Although Georgina’s name is redacted from the fax, a little investigative journalism revealed the London telephone number it was sent from and this was confirmed by the MoD reply, dated 18 July, which opens with ‘Dear Ms’.

Georgina's book, You Can't Tell The People, was published in November 2000, six months before the release of the MoD file. But the book had been promoted as “the definitive work" on the Rendlesham incident. The urgent tone of the fax suggests the writer was a little peeved the papers had not been sent to her before publication.

Nevertheless, despite being aware of the true identity of the "member of the public" whose work actually led to the release of the file (from the article in The Guardian on 28 August 2001), both Bruni and her friend and writing partner Nick Pope henceforth continued to insist that I played no role in its release.

The afterword of the second edition of Bruni’s book, published in 2001, contained a new chapter, 'The Release of the Rendlesham file'. Again there was no mention of my role in the release, and Bruni was now taking full credit for herself. The chapter opened with this claim:

"I have no doubt that these [documents] were released because of pressure put on the British Government regarding the case presented in the hardback edition of You Can't Tell The People, which resulted in questions being asked in the House of Lords."

To this day, Nick Pope continues to promote this misleading version on his website. In an article called ‘The Rendlesham Forest Incident’, he writes: “I should first pay tribute to Lord Hill-Norton and Georgina Bruni whose tireless efforts over the last few years have culminated in the release of these documents”.

Later, for good measure, he adds: “...with the release of the Rendlesham files Georgina Bruni has achieved a significant breakthrough for UFOlogy.”

I'm not looking for medals or praise - just the truth, which is now out thanks to the Freedom of Information Act.

It would be a simple matter of courtesy, or good manners, to acknowledge the role I played, even in passing, or at least set the record straight now the facts are clearly documented under FOIA and indisputable.

Sadly, Georgina died in 2008 so is unable to explain why she felt it necessary to publish an incorrect version of her role – or more accurately, lack of – in the release of the Rendlesham file.