Where are the UFO Whistleblowers? 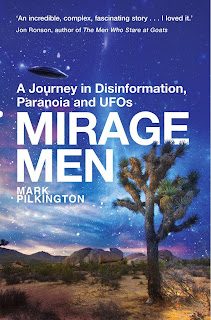 Wikileaks has once again shaken the foundations of the government and military establishment with its mass leaking of documents chronicling the war in Afghanistan.
The leaking of more than 92,000 secret documents to the media last week revealed how difficult it now is for any government - however powerful - to conceal information from the public.
With near impregnable security for its servers and twin commitment to holding authority to account and protecting its sources, Wikileaks has become a haven for whistleblowers to expose lies, corruption and human rights abuses wherever they occur.
But here is the conundrum. Many thousands, if not millions of people across the world, believe the US Government is with-holding evidence that we are not alone in the universe. A central item of this belief is that a flying saucer and its occupants crashed at Roswell, New Mexico, in 1947 and the authorities have concealed that fact for over 60 years.
If there is any truth in these stories hundreds, if not thousands, of people must have been involved in the perpetuation of the cover-up. Foreign governments, such as the Soviet Union during the Cold War, would have learned about the incident and would, therefore, have to be party to the secret. Again, many many people across the world must have been involved in perpetuating the greatest conspiracy in the history of mankind.
So - where are the UFO whistleblowers?
As Greg Boone, who believes in the existence of a global UFO cover-up, asked plaintively on a newsgroup recently: "Why has not one major UFO secret been revealed via Wikileaks?"
He went on to add: "Surely the truth regarding UFOs would so shake the foundations of global criminal evil that just one brave soul would come forward and forever change the history of humanity."
Well Greg, we're waiting...and waiting...and waiting.
Of course there have been plenty of hoaxes and forgeries that have been proclaimed as proof positive of the alien presence in the past. But the amateurish MJ-12 papers that were supposed to have been created by a super-secret US committee that concealed the Roswell incident would not pass the first test of authenticity when placed under the Wikileaks microscope.
While we wait, my colleague and fellow Fortean Times writer Mark Pilkington has published his own in-depth excoriation of the murky world of military intelligence involvement in the UFO phenomenon.
Mirage Men: A Journey in Disinformation, Paranoia and UFOs is published by Constable this month and comes highly recommended. Mark's central thesis - that intelligence agencies have been promoting the idea of UFOs as a useful cover for their own covert testing of military technology - is not entirely original. But Mark is no armchair theorist and he and sidekick John Lundberg developed their new take on 'the federal hypothesis' during a long journey through the badlands and backwaters of America, meeting some of the key players in the UFO industry along the way.
Unlike many books with 'UFO' on their cover, Mirage Men is a gripping read.Whether you agree with Mark's conclusions or not, you will enjoy the journey and come to realise that the closer you get to the source of UFO stories the more the whole phenomenon takes on a mythic dimension.
While Mirage Men chronicles the phenomenon in North America, Andy Robert's new book takes a withering look at one of the UK's central UFO legends.
UFO Down (published by the CFZ early in August) is subtitled The Berwyn Mountain UFO Crash and investigates the facts and folklore surrounding a mysterious incident that occurred in North Wales one night in January 1974. The Berwyn incident has been described by the some as 'Britain's Roswell' and Andy has spent the past two decades tracing every possible permutation of the legend to its source. As an exercise in investigative journalism, his journey takes some beating and the conclusions may surprise those who expect a thorough debunking of this particular story.
Both Mirage Men and UFO Down are fine pieces of writing and I urge everyone remotely interested in Fortean phenomena to add them to their reading list.
Posted by Dave Clarke at 01:50