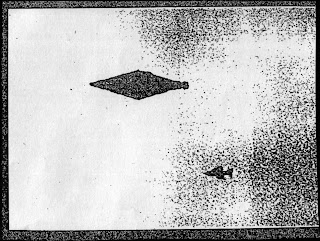 One of the key themes to emerge from these papers is the curious Aurora spyplane saga. This is linked with a little-known set of colour photographs, apparently taken in the Scottish highlands, which appear to show a large diamond-shaped UFO shadowed by military jets.

From the late 1980s the British press was buzzing with rumours about a stealthy, cutting-edge aircraft that some experts believed was an advanced US ‘black project’. Codenamed Aurora, the spy plane was said to be capable of hypersonic speed. Alleged sightings frequently made headlines in UFO magazines and in aviation weeklies such as Janes’ Defence. But the US Defence Department always denied such a project existed and two decades have passed without any real evidence that it ever did.

And these DI55 papers show just how easily the intelligence services can accept such exciting speculation as fact. DI55’s main responsibility involves the collection and assessment of intelligence on ICBMs and cutting-edge aircraft. Judging by the contents of these and other files during the 90s some of its personnel clearly did think it was possible, indeed probable, that someone – possibly the US – was flying an advanced black project aircraft within the UK Air Defence Region.

The most intriguing linked incident occurred at 9pm on 4 August 1990, at Calvine, a remote hamlet on the A9 near Pitlochry in Scotland. According to the scanty details released by the MoD, two men saw a large diamond-shaped UFO hovering for about ten minutes before it disappeared upwards at great speed. During the incident military aircraft were seen making a number of low-level passes. One of the men had a camera and obtained six colour photographs showing both the UFO and at least one of the jets. The negatives were sent to the RAF Pitreavie and the Scottish Daily Record who passed them to the MoD.

The images were scrutinised by the MoD who identified the jet as a Harrier. They were also able to spot a second Harrier, but were unable to identify the large object clearly visible on the prints. Two poor quality photocopies can be seen in the file DEFE 31/180/1 on pages 37-38. This story was treated very seriously, as a defensive press line was prepared in anticipation of questions from the media, which strangely never materialised (this can be read in DEFE 31/179/1: pages 157-8). The briefings states that inquiries had failed to identify the Harriers shown on the photograph, as records suggested none were airborne at the time.

In the event, it appears the Daily Record decided not to publish the story. As a result the true significance of the photographs has remained unclear until the opening of these DI55 files. Nick Pope was the civilian opposite number of the DI55 desk officer during this period (1991-94) and he was the first to publish a brief account of the incident in his book Open Skies Closed Minds (1996). Pope described the photographs as “one of the most intriguing [UFO] cases in the MoD’s files”. He also describes how he kept an enlargement of one of the Calvine pictures on his office wall until it was taken down by his head of department.

In July 1996, prompted by Pope’s account, Don Valley MP Martin Redmond, tabled a parliamentary question on the Calvine photograph. In reply, MoD said: “A number of negatives associated with the sighting were examined by staff responsible for air defence matters. Since it was judged they contained nothing of defence significance the negatives were not retained and we have no record of any photographs having been taken from them.” (Hansard, written answers, 23 July 1996).

Negatives may not have been retained, but it appears that further secret work was carried out on the prints that were retained by the MoD’s Defence Intelligence Staff. In January 1992 – long after the negatives had been returned to the photographer - they tasked a RAF unit to produce detailed line drawings of the unidentified object. The task sheet notes that “sensitivity of material suggests very special handling.” (see DEFE 31/180: pages 55-57). From that point the paper trail goes cold.

Many questions remain. Who was the photographer and how can we be sure his story was genuine? Why did the Daily Record decide not to publish the photographs in 1990? If they really were taken on the date stated, then why were the MoD unable to trace the origin of the Harriers clearly shown in the print? And why, almost two years later, did someone decide to request, in secret, further investigations?

All we have is the usual rather bland statement that MoD decided the incident was unexplained but of no defence significance: case closed. As a result, this report was added to a long list of others, including the notorious Cosford incident, that helped to convince some of the more imaginative MoD staff that someone was flying an unidentified stealthy craft over the UK.

Nick Pope’s brief account of this case notes that “neither the experts nor I accepted the Aurora theory [for the Calvine photos]…even if it exists, it is most unlikely that Aurora could function in the way described in the encounter.”

But this is faulty logic and puts the cart before the horse. Surely the first question any investigator should have asked was: does the story itself stand up to scrutiny? Sadly, there isn’t any evidence in these files to suggest the MoD ever spoke to the photographer, let alone asked any critical questions about his story.

Now documents only tell part of the story. To quote Sherlock Holmes: “It is a capital mistake to theorise before one has data. Insensibly, one begins to twist facts to suit theories, instead of theories to suit facts.”

As the WMD farce proved the spooks can and are fooled by faulty intelligence - especially when they want to believe something is true.