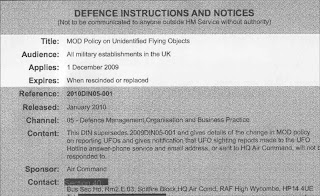 Britain's Ministry of Defence is destroying all UFO reports it receives so it can avoid answering Freedom of Information requests.
This decision means that any future sightings - even those made by reliable sources such as aircrew, radar and police - will in future be shredded after 30 days, according to a formerly secret document released to me in response to a request under the FOIA.
I released copies of the original documents to the Press Association and Channel 4 News who have exclusively made them available to the public as a simple download from their website.
According to a November 2009 MoD briefing, the new policy took effect immediately after the decision to close the UFO desk and the public 'UFO hotline'. Officials said these "serve no Defence purpose and merely encourage the generation of correspondence of no Defence value." A defence minister, Kevan Jones MP, approved the decision:

"...that reported sightings...should be answered by a standard letter and, on the advice of Corporate Memory and The National Archives, should be retained for 30 days and then destroyed, largely removing any future FOI liability and negating the need to release future files post 30 November 2009."

The justification given for the decision is a tripling in the numbers of UFO sightings reported to the MoD, from an average of 150 reports per year during the past decade to a whopping 634 in 2009. "The increased workload caused by this upsurge...is now exceeding the level of staff resource allocated to the task and impacting on other tasks," according to the briefing. No doubt many of these additional reports were made as a result of the campaign by The Sun newspaper to persuade its readership that orange lights floating the skies were alien spaceships rather than Chinese lanterns.
The MoD has for some years been looking for an excuse to close down the UFO desk and this tripling of reports has provided the opportunity they needed. Anticipating the decision would attract outrage from UFOlogists, the MoD predicted they "may individually, or as a group, mount a vociferous, but short-lived campaign to reinstate the 'UFO Hotline' suggesting that, by not investigating UFOs, MoD is failing its Defence commitments." It adds: "It is possible that there will be a resulting short term increase in public and Parliamentary correspondence [but] the press interest is...likely to be more frivolous in tone than critical."
Clearly rattled by claims they were hiding information on UFOs, MoD reveal they had "deliberately avoided formal approaches to other Governments on this issue [as these] would be viewed by 'ufologists' as evidence of international collaboration and conspiracy." As a result MoD officials searched the US Department of Defence website where they found a press release that stated "the issue of UFOs is no longer being investigated by the US Government". This policy was implemented following the closure of Project Blue Book in 1969 and the subsequent transfer of records to the US National Archives (NARA).
As I suspected all along, the closure of the UFO desk and the decision to transfer all remaining MoD files to The National Archives are linked. Referring to the US example the British MoD briefing adds: "This is broadly in line with our proposed way forward. Public sources suggest that other Governments are taking a similar approach to ours, with the Canadian, French and Danish Governments publishing their historic UFO files in recent years."
The five page briefing released simultaneously to me and colleague Joe McGonagle was originally circulated to Secretary of State Bob Ainsworth, senior civil servants and military officials including the Chief of Air Staff, and intelligence branches of RAF Air Command on 11 November last year.
It included a "defence newsbrief" that said the decision to end all further UFO investigations was taken because the task "diverts resources away from core defence business...MoD has no interest in receiving reports of UFO sightings and will not be actioning the reports that we receive post November 2009."
A Defence Instruction and Notice spelling out the new policy was circulated to all military establishments in the UK on 1 December (see copy, above right). It contained an order that "stations...contacted by members of the public are advised not to encourage them to report a UFO sighting or expect an investigation to take place."
The new policy means that any UFO reports received in future will be answered by a standard letter, with the correspondence destroyed within 30 days: "This would mean that there would be no FOI liability and no requirement to release any further files to the National Archives, since the only filing generated would be copies of the standard response."
It also allows MoD to extend its ongoing transfer of files to The National Archives to include all the most recent Air Command UFO files opened before 30 November 2009 when the decision was implemented. This means that by the end of the disclosure programme MoD will retain no further paperwork on UFOs.
The document concludes: "There is no merit in maintaining a dedicated UFO desk in Air Command, nor in adding to the staff resource allocated to the UFO task. The current UFO staff resource should be redeployed to other public and Parliamentary tasks as soon as possible."
Intriguingly, this decision does not apply to, or signify any change in "the standing arrangements for control and defence of UK airspace." Under the question: "are our skies being left undefended?" the press briefing answers that: "There will be no change to current arrangements and air space integrity will be maintained through the existing mixture of civil and military radar and aircraft on quick reaction alert."
Concluding the policy, a defence official writes that MoD's public response to inquiries on UFOs in future will stress that:
The disclosure of this document makes it evident this is the endgame as far as the MoD are concerned. Clearly, in a time of economic crisis savings have to be made and public spending cuts provided the opportunity they needed to finally rid themselves of a subject they regard as a nuisance. Indeed, the similarity between the concluding statement and the recommendations of the University of Colorado report that led to the closure of the USAF's Project Blue Book in 1969 bear close scrutiny.
But if MoD have learned anything from 50 years experience it should be that UFOs will simply not go away. I suspect that the next time a near-miss incident involving civil or military aircraft occurs, they will be forced to rethink this somewhat short-sighted policy. Only time will tell.
Posted by Dave Clarke at 06:42