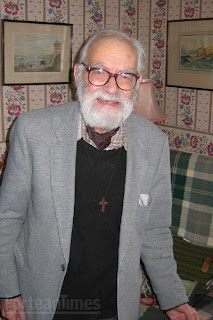 One of Britain's longest serving Christian UFO theorists, Fr Paul Eric Inglesby has died, age 94, at Glastonbury, Somerset.
Inglesby's interest in UFOs began at the dawn of the modern UFO era in 1947. He was one of the first subscribers to the magazine Flying Saucer Review in 1955.
At the opening of WW2 he served in the Royal Navy and later in the war as Assistant Secretary to Lord Mountbatten working in Combined Operations at Whitehall.
According to his 1978 book UFOs and the Christian his lifelong fascination with the subject actually began in 1938 when he underwent a "devastating spiritual experience" triggered by a life-threatening illness contracted during his naval service. This included an out-of-body journey to Mars and visions of a future atomic war against demonic forces who controlled spacecraft. During this experience "not only did I witness future events, in a mental telepathic sort of way, but throughout the whole of this time a battle was raging for possession of my soul."
In 1964 he joined the clergy as a Church of England priest and during this time corresponded with some of the key figures in UFOlogy. During the occult revival of the 1960s he rejected the popular idea that flying saucers were extra-terrestrial and came to believe UFOs and their occupants were of demonic origin. Although not fully reflected in the UFO literature, this was a view shared by a number of leading British UFOlogists, including three former chairmen of the British UFO Research Association (BUFORA).
In 1980 Inglesby converted to the orthodox faith (taking Paul as his Christian name) following a meeting with Fr Seraphim Rose at a monastery in California. Fr Rose had written a treatise that identified UFOs as demonic signs of the approaching End Times and this document proved to be highly influential for Ingleby's unpopular but uncompromising viewpoint on the subject.
Inglesby's Christian UFO archive contains not only his dealings with UFOlogists covering a 60-year period, but also his correspondence on the subject with a range of famous figures from the military, literary and religious establishment. These include Professor C.S. Lewis, Lord Mountbatten, Lord Dowding, Lord Hill-Norton and Sir Victor Goddard. During the 1960s Inglesby asked Mountbatten, who had publicly expressed his belief in UFOs during the 1950s, for his considered views. Writing in 1964, as Chief of Defence Staff, he responded to say he no longer believed after discussing the subject with the British government's Chief Scientific Advisor, Sir Solly Zuckerman. Zuckerman told him there was no more evidence for UFOs than for ghosts or the Loch Ness Monster.
In 1977 Inglesby founded the Christian UFO Research Association via an advert placed in The Church Times.This was a loose association of clergymen from a number of denominations plus UFOlogists whose aims were to warn the public about the dangers of an obsessive interest in UFOlogy which Inglesby believed was "fraught with danger for the unwary and riddled with heresy and false belief."
In the same year he wrote to the Archbishop of Canterbury and Lord Mountbatten warning that Her Majesty the Queen and Prince Philip should not attend the Royal Premiere of Steven Spielberg's film Close Encounters of the Third Kind, as the film had a Satanic sub-plot involving demonic possession and alien landings at the "Devil's Tower" in Wyoming.
His attempt to dissuade them failed, but the group had more success in its campaign to influence peers of the realm who attended the UFO Debate in the House of Lords during January 1979. It was through Inglesby's intervention that Maurice Wood, Bishop of Norwich, contributed his view that obsessive belief in UFOs "obscured basic Christian truth."
After the Lords debate he founded a second pressure group, Christian UFO Concern, and became friends with Admiral Lord Hill-Norton who shared Inglesby's naval background and his conviction that UFOs were a clear and present danger to humanity. During 1996, with public fascination with UFOs rising again, Inglesby produced a booklet, The UFO Concern Report, on behalf of Hill-Norton. This was privately published and circulated to a number of "top people" who had expressed an interest in UFOs. It was intended to warn them of what the authors believed were the occult origins of the subject. In the foreword Inglesby said UFOs were "essentially a religious matter" rather than a military threat and added: "There is certainly a degree of psychical involvement in almost every [UFO] case. Quite often, such experiences are definitely antithetical to orthodox Christian belief."
Hill-Norton died in 2003 and Inglesby retired from UFOlogy shortly afterwards.
I spent a full day with Inglesby at his home in Glastonbury during the summer of 2005 and was able, with his permission, to examine the archive of material he had collected which stretched back to the 1950s. More details of the Inglesby's life and the demonic theory for UFOs can be found in my Fortean Times article 'Flying Saucers from Hell', published in the summer of 2006.
His last words at the end of my interview were: "UFOlogy is a vast, huge subject, shot full of religious danger. To be immersed in its study, without spiritual protection, is fatal. Further curiosity, even scientific curiosity, equally. Remember the cat."
For more biographical details see the obituary by Peter Hore published in The Daily Telegraph on 28 June 2010.
Posted by Dave Clarke at 02:35